Wheels are made for rollin, mules are made to pack.

Coming to you today from San Luis Obispo…Jim “Hills” pad with roomates Dave, Matt and Steve! Taking a few

Back in San Francisco….Greg and I are dropped off at the ferry by Ashley to explore the city for a few days!!

Getting off the ferry at Market St in San Francisco is amazing in itself. We head down into the financial district on foot 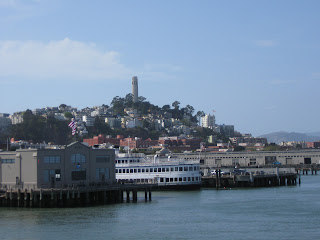 To check into our hotel on 7th & Folsum streets. It is a borage of visual stimuli!! To say the least….old buildings with beautiful architecture, buses, old street cars, cable cars, people going every which way on foot and by bicycle…. we check into our hotel (which by the way we booked online for $58 a nite!) its very nice, clean and convenient! Then head over to Chinatown…for some dinner….and we get to listen to some Chinese folks playing instruments and singing! Chinese Buskers if you will!! 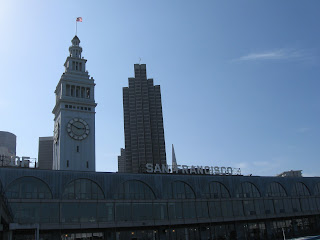 While in this fascinating city we also visit the Haight Street neighborhood which of course is like stepping back into the 1960’s….hippy grooviness abound! Very cool vintage shops, cafes, thrift stores, some very pretty old Victorian homes and youngsters floating around trying to capture their own 1960’s groove….we catch some very good street musicians playing their stuff,too…it’s a fun part of the city for sure!

﻿ ﻿ We jump on an old street car that takes us out to North Beach and Fishermans Wharf. North Beach is the Little Italy of San Francisco….yummy restaurants (we have dinner in one)….and visit the” City Lights” bookstore, an old beatnik haunt from the 50’s & 60’s ! We have a Belgian beer at “Jacks 85 Beers” in one of the old Cannery Row buildings….YUM! Jacks has been there since 1932.

Next day we visit the Mission District….full of cool murals…the Dolores Mission (very pretty) which is suppose to be the oldest bldg in the city! And have lunch at the Dolores Park Café….then hop on a cable car (these things are Too fun!…Rice a Roni…the San Francisco treat!) a popular song/commerical from childhood!! Heehee…and a bus to head over to the marina and back to the North Beach section….the marina sports a boardwalk…and some fishing/pleasure craft to drool over…..

The beautiful thing about these big cities is the different neighborhoods with completely different flavors, foods, people! And how small family businesses still flourish and are supported. San Francisco was a treat! We didn’t even come close to seeing everything…..were glad we got to experience what we did and hope to be back again some day!

Next morning we say goodbye to Ashley (she drives us to the park n ride lot) and Slide Ranch…thanks to everyone there for sharing their space in such a beautiful spot! We hop on the Mule for a scenic ride over the Golden Gate….it’s a gorgeous morning…. 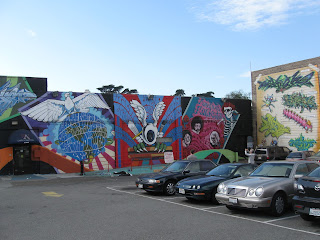 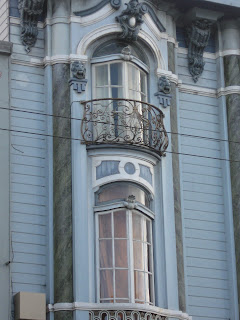 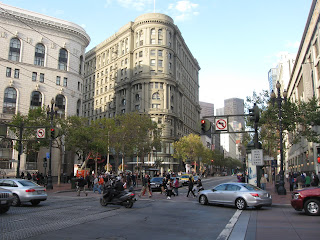 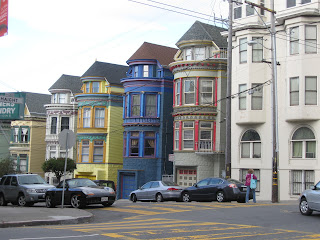 The ride through San Fran went quite smoothly, much easier than expected. The route winds and wends its way through the beautiful and expensive west shore neighbor hoods. Not much traffic and good riding untill….Eventually we got spit out onto the One. And the One coming out of San Fran is more like a highway. Good shoulders but busy. In fact the One doesn’t really take on its coastal [fun on the one] personality untill you approach half moon bay. From that point forward to San Luis Obispo the One becomes fun..Again.-----cause after all it’s all about Fun on the One. Cruising with the top down, hair to the wind, your baby right next to you. Oh yea, California dreamin baby, with the waves crashing the shore and a north west wind pushin you on down the road. Oh yea baby, fun on the one. Climb a hill to a vista, take a picture, race down the hill. Youre in the big gear now, hair pin turns, 20 miles per hour , you take it at 30. Commit to the turn and the bike pops out of the turn like a well arched ski. Into the the next turn. You’ve taken over the whole road now cause even the sports cars can’t corner like this weighted down groove machine. Youre approaching sea leval, last corner. Take it hard and fast. Bang a right with all the speed you can carry cause ------you got another hill to climb, with another view and a pullout with a picture. That’s what I’m talkin about. That is fun on the One Baby!!!! 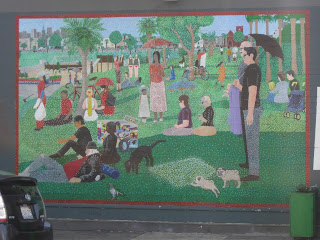 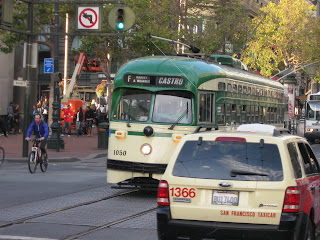 Monteray----Cute, cool, it had a nice serene feel to it. The first of the mission towns. Kinda feel s like Fante Se’ cept on the ocean. That day was a short day. Time to linger on the Presidio, and board walk. Find some high octane Belgian brews. Aw, but now its time to go to camp. The sun is getting low! Camp…..Vet memorial park. Right in what seems to be , according to the map and directions, right in the heart of Monteray. Not!! At least not without riding up a super steep. I mean sustained %10 at least, for 2 miles, grade. Possibly the steepest of the entire ride; From here forward to be known as Buzz Kill Hill!!! And that’s exactly what it did!! 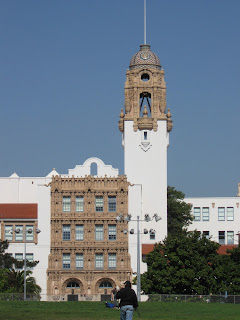 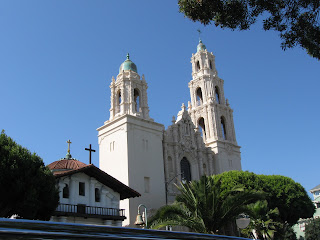 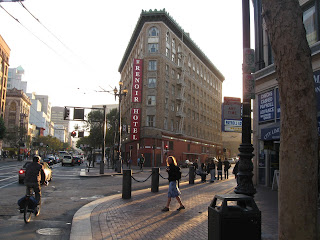 The hiker biker sights are getting crowded now. The campsites are fewer and farther between and the hiker bikers are beginning to bunch up. The hikers, by the way, tend to be transients. Startin to get a little seedy! You’re sharing the pikinic table boo boo, with a guy: So what do you do? Well, I used to own property round here, but now I’m sort of try’in to simplify. Later------Well actually I just got out of prison on a gun runnin charge. So I just sort of move from campsight to camp sight……Oh. that’s nice!???! 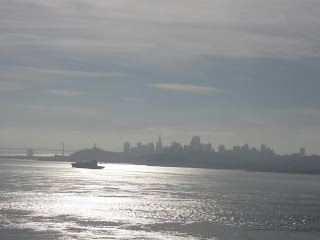 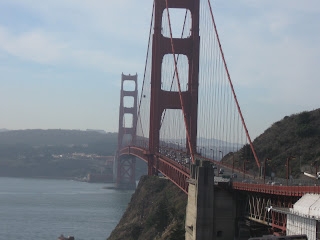 From Montery to San Luis Obispo [ SLO] Has some of the vintage fun on the one riding through the region known as Big Sur. Cut out of the cliffs, Overlooking and Constantly giving into the sea. Steep climbs, fast Descents, great corners, no shoulder, moderate traffic due to the time of year. Invigorating. It takes three days to ride through this section. On the first day the weather is fine. Inspirational views. The next day; The marine layer hugs to the water like a down blanket and we are like an airplane flying over and looking down on the clouds. Its as if the ocean is frozen in time. The rollers suspended in slow motion as far as you can see. The waves breaking on the rocks below are not breaking at all. They are crawling up the side of the cliffs . Fingers of mist reaching for the road. Reaching for you. As if to grab you by the ankles and pull you in. Surreal; to say the least.

The Ocean and San Andreas Fault both conspire to eat the one, to swallow it, to turn it into what it once was. A steep cliff diving into the ocean. It doesn’t really belong there and doesn’t really want to be there. As a result it is constantly under construction. Road Construction is a Cyclists friend. Holding the traffic back. Allowing us to have the road to ourselves in 20 minute intervals. 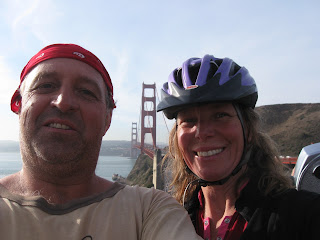 On day three we wake up at a campground that sits right on a grassy knoll over looking the ocean, nestled between it and the road. The camp ground was closed. Gated shut. We and two other cyclist poach it. It is beutifull. Perhaps one of the nicest campgrounds on the whole ride. But; we are the only fodder for the coons. I spend the night warding them off. Trying to keep them from hauling our bags into the poison oak brush. Never to be seen again. The only thing a coon respects is having something thrown at them. I collect my rocks. I throw my rocks. But to no avail. We are the only campers there. There is no one else to raid. The battle carries on thru the night. No one wins!!

On day three the marine layer is now fog. There is no view. Just a windy road. Hard. Fast. Still fun. Just no pictures.

Big Sur is behind us now. The last of the winding, cliffy, classic coastal riding. We are now in southern Cal. Flatter roads, less climbing, More beaches, more transients. The ride is winding down. 7 days of riding before San Diego. 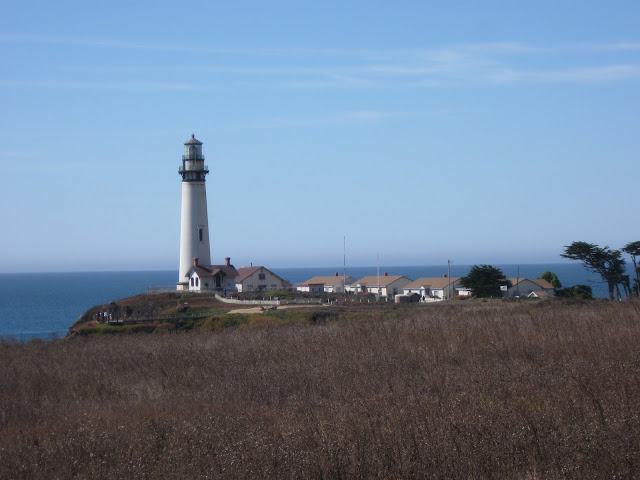 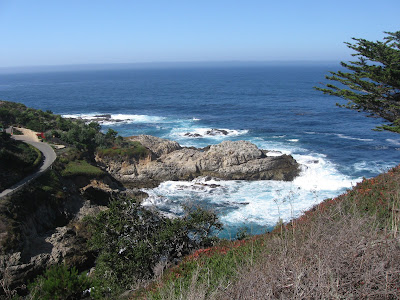 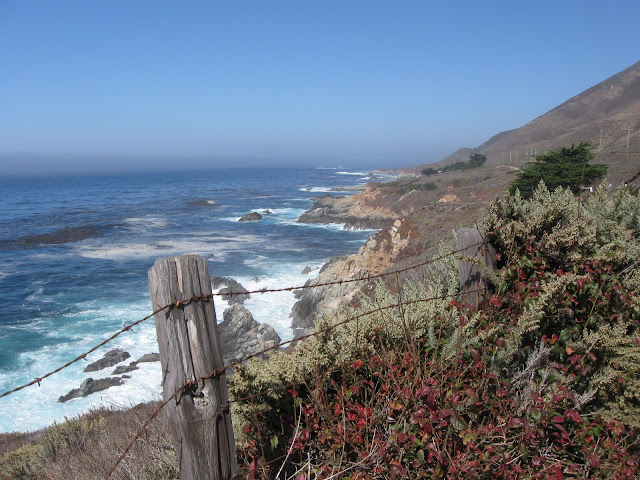 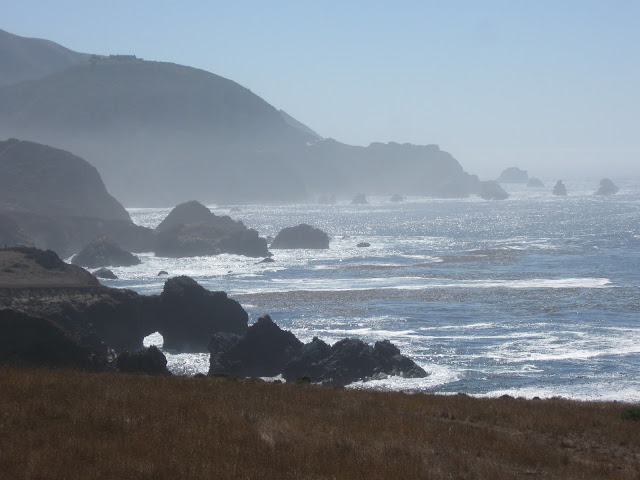 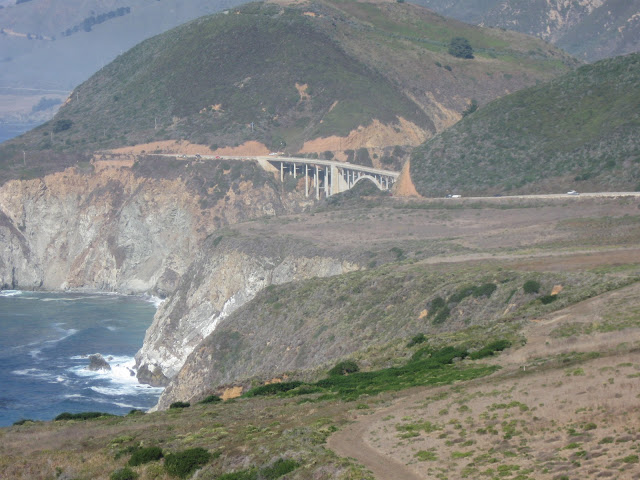 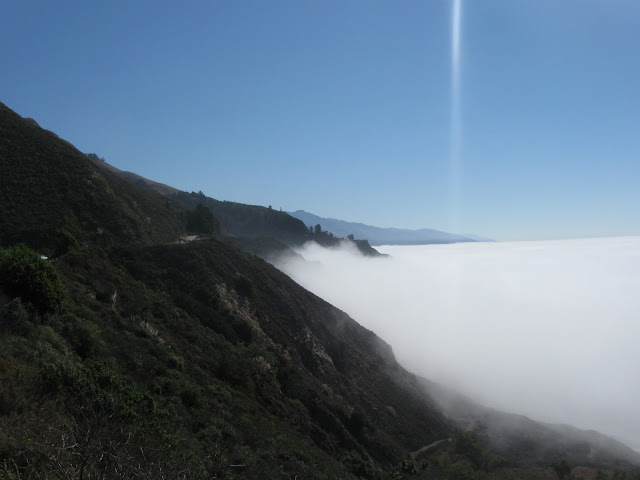 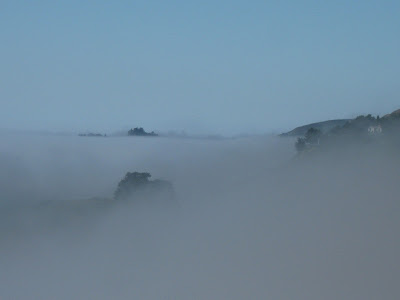 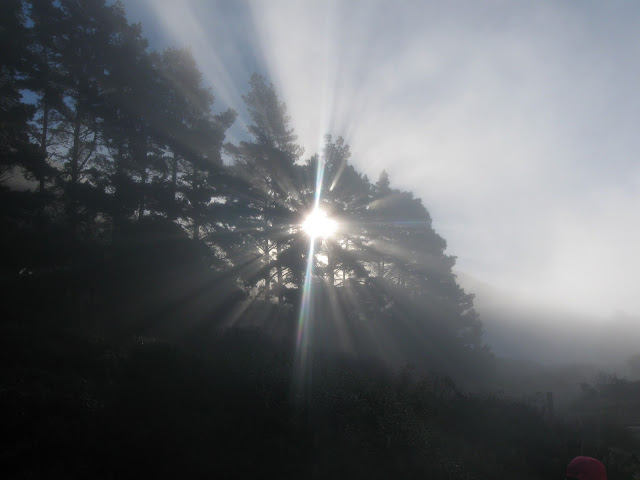