Astoria to Florence Man the Oregon Coast is Rad

We are writing to you from Jessie M Honeyman Memorial State Park. Which is just south of Florence Or. And at the northern end of the Oregon Coasts Great Sand dunes National Monument. Today we will explore the Sand Dunes and if wind permits, fly our newly acquired kite.

We are here waiting on a Derailleur Hanger for the mule. The reason being that, oh, about several days back, when the sky was misting, we were on a rather enduring climb with little shoulder on a rather busy section of highway 101. It was the last climb of the day and we were about two thirds of the way up the hill. As Terri and I often do we shifted down from first gear into a slower gear so that we could stand up and give our butts a break. After having done that I was trying to get back in the easy gear when; you know, we chain sucked the rear derailleur cage up into the rear wheel and…Well lets just say it wasn’t pretty. The cage was broken as well as the drop out. The worst part was we were stuck on a steep hill, on a blind corner, in the rain, and at this point we weren’t goin nowhere’s, as the rear wheel was locked in place by the cage. It was 3 p.m. I had to take off the rear panniers and the trailer and I set them out behind us down the road as my safety flairs. Beyond the shoulder the hill fell steeply so I had no place to work except in the rain filled gutter that was the shoulder of the road. After an hour and ½ I Finally had us anglo rigged to head down the road. The solution was to break the chain and mend it back together in a single speed. But, because of the hill I put it in a climbing gear. So, after the hill we had a nice descent but the gear we were in top end was 4.9 miles an hour, so we limped the last 5 miles into town in the rain as the sun set.

After getting into our urban campground in Lincoln City well after dark we pulled into the hiker biker sight where we ran into our fellow tourer friend Karl whom we didn’t expect to see and as we pulled up to what was to be our camp for the night we hear this screeching and fluttering sound up in the trees and as we try to figure what‘s goin on this screeching blob falls out of the trees within 3 feet of us and is fluttering and rolling on the ground. What is it?? A rabid squirrel or bat?? We reach for the flash lights and what we see is a pigmy owl trying to kill a song bird. Our lights distracted the owl and the bird got away. But, not for long. A few minutes later and we hear the same sounds again, only, the owl keeps it contained in the trees and soon the screeching stops. Cool!

9/12/10.….this blog is dedicated to my Dad, Bill, who died one year ago today…he was a big hearted, stellar human being that is so very much missed!! He would have loved to have been following us on our bike adventure and rooting

BE in the moment….Be kind to the ones you love…SAVOR the DAY!

WOW!!! What an awesome day of riding!!!! Some of the most spectacular views of the coast by far! Rocky cliffs that jet down into the ocean below…along with pine treed mountains that we wind our way around….I don’t think I have ever seen bigger,wider views of the ocean before! We saw whales spouting and heard sea lions barking! Got some great views of Heceta Light House..I think it’s the most famous for picture taking! Sweeeet!!! 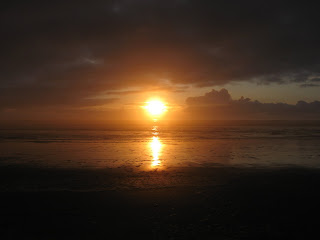 Are way off the beaten path in a pretty dark forested area of camp. We had to climb our way up into this one while pushing The Mule….we shared this site with about 9 other cyclists including our buddy Karl which turned out to be pretty fun! Getting to know other cyclists along the way has been great….giving each other tips, encouragement or sharing a beer while we all pedal to our destinations……We moved our camp closer to the showers/toilet the next day…sharing our space with Karl…he decided to take a day off to do chores. We had to check on our bike part (not here yet!!) do laundry, food shopping and emailing/interneting/phone calling,too! One of the beautiful things about camping is you’re “cooking out”…..like BBQ-ing, it’s a guy thing…at least for my guyJ….so Gregs the kitchen dude and has been doing most all of the cooking!!! SwEEEEt!! Hes a great cook to boot…I’m a lucky girl….

I on the other hand get to do the tent stuff…I think I have the “putting up the tent” down to just under 3 minutes!!! Its the little things….right? 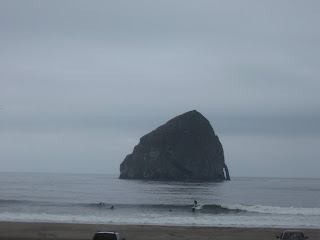 So. We needed a mechanic in a town thar has none…but wait, maybe one. Lincoln city hasd no town. It’s one of those soulless places. One long strip mall. Like 10 miles long. And at the end of the mall supposedly is a bike shop. So with our 4.9 mile per hour top end single speed when begin the 2 hour spin in search of the bike shop. Oh no! it’s not there! But wait! Ther’s a van that says Bike Newport. [the next town down about 30 miles] and they are closing up shop in deadbeat Lincoln city and takin their gear back to the mother shop. And, they got room for our tandem. Timming is everything and we just cought them before they left. So we loaded the mule into the trailer and went to their very cool shop in Newport. Complete with a lounge, showers, laundry, and a keg from rogue brewery. All for the wayward touring cyclist. 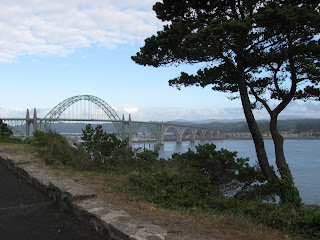 that’s how we make it to Newport, and that’s how we get to the Rogue Brewery where they treated us well and gave us the rogue discount as they should.

After having spent 5 nites in Astoria, at the Norblad Hostel and enjoying one of the local cafes (Blue Scorcher) and

One of the 2 breweries (Ft George Brewing Co) we left for our descent on the Oregon border. We escaped the Columbia 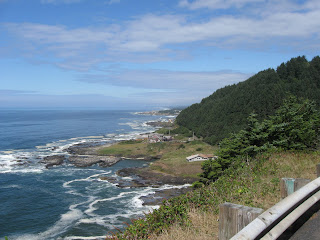 Heading out on the wrong highway! Although it only cost us 12 miles or so the extended loop that we headed out on

Took us by a beautiful waterfall…the roads were windy and nice and not busy at all. At the top of a long climb we

Seaside a little uncomfortable! Ruining what could have been a screaming descent! Fortunately for us we found a bike 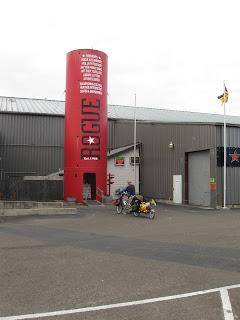 Shop that had been family owned and operated for many years….they made it right for us! After having a little lunch we headed back out on to Hwy 101. Lots of traffic, a scary loud tunnel, some hard climbs and rain……..but thru it all….imagine…winding thru this beautiful mountainous coastline with fog and mist all around…glimpses of earily gray ocean waves…SWEEEET!…..but then you feel you’re ass grinding in the seat…and reality has set back in! you’re still trying to get up this hill….okay..you make it….but you make it to this quaint little town called Manzanita (in the RAIN!) just 2 miles before the damn campground ( you’ve been on the bike all day and you’re hungry!!) you see this cute little hotel…okay,that’s it we’re checkin in!!! 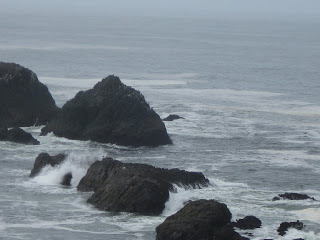