Eddied out on Schooner Suva out of Port Townsend


Well 10 days have passed since we last blogged and you might ask yourself; where the hell are they, whats goin on etc… well rest assured we are alive and well and in Seattle.

First off ; We want to give a big shout out to the people who have left comments: Yo, Yo, Yo, Steve. Where you at Bitch!!! And to Mr. Cooney; The coffee is quite good, but, thanks for the offer, We actually don’t talk much, we just get into that meditative groove that is cycling. The music is in the soul, and just say no to I pods. At least when riding. Very important to hear those menacing cars approaching. And to Pimpy A’s friend; glad you are following us and that you are enjoying the ride!

Before having left Bellingham, which is a sweet place, we encountered some good old fashioned hospitality. Bellingham has a very large farmers market that we visited. But , our visit was short lived due to the fact that there was a micro brew pub called Boundary Bay right across the street. We entered, ordered a sample platter o’beer and invited our selves to sit down next to a guy named Bob Hollister. An elderly gentleman whom like a lot of folks up here in the N. West is a bike guy. Bob was kind enough to buy us a round of Beer. Thanks Bob.

Teri and Charlie our hosts in Bellingham have a friend John who co-owns a 28’ catalina sailboat and he took us out for a sunset booze crooze, so to speak. It seems that though the intentions are there, actually consuming mass or even moderate quantities of beer or booze just doesn’t seem to happen. A lack of appetite I suppose. Any how it was a beautiful evening, with live music next to the water, and a waxing crescent moon!! Thanks John.

A BIG THANKS again to Teri and Charlie..our wonderful and gracious hosts! And for showing us what a great place

Bellingham is! We will miss the trains…and those kooky “turns” that make that squawk like noise….AND vanilla ice cream with wild blackberries….YUM! 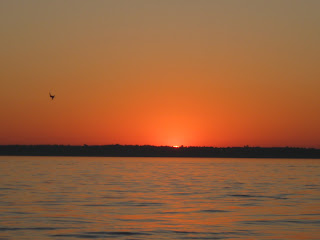 Sooo after 5 days of chillin in Bellingham we finally hit the road. That days ride was the best yet. Heading south out of Bellingham is a road they call Chuckanut drive. It wends and winds it’s way through dense wet forest cut right out of the cliffs above the ocean. It offered nice climbs and great descents with awesome views of Bellingham bay. The ride then dropped us out on the flats with wind at our back and so for the first time in 300 plus miles we were able to maintain a healthy 14 mph speed for several miles. I have to tell you that to be able to roll along like that was invigorating. Taking a break at a small country store we met a kid on a nice carbon fiber bike and when I say kid I mean 18 to 22 years old who must of weighed well over 300 pounds. Anyway this kid is on the tail end of a 60 mile ride and has a permanent shit eatin grin and having noticed us looking at the map, decides to give us some route advice. Man did he guide us right. I have to admit that I am still surprised that we were taking advice from this hugely over weight kid but, he obviously knew his way around as a cyclist, cause his suggested route was right on. The highlights  beside Chuckanut drive was the berry barn, [homemade pies, icecream etc…., a small town named Le Conner, and Deception pass; that is a water channel that feeds a huge inlet and the current flowing through looks like a river. Complete with boiling eddies, waves etc..

Nice riding along the shore, rolling roads, nice quaint towns, lots of cyclists, not much traffic. Nothing about this ride stands out other than it was Idyllic. Port Townsend on the other hand is Cool, from a water/sailors point of view. It is a Sailors town. They have a wooden boat festival there every September but you don’t have to go there then to see wooden boats. And so begins the story as to why we haven’t blogged for awhile. 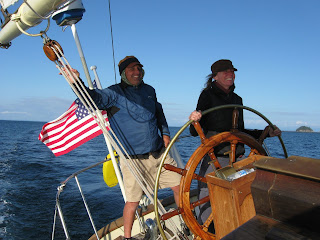 As we un boarded the ferry into Port Townsend we had one agenda. Find the brewery. To do that we road down what is the main drag of town which emptied us out to a marina full of old wooden boats that for us was a treat to see. Such a treat that it became alluring. After taking a slew of photos….. We were about to enter the Twilight Zone. Or should I say the Twilight “BOAT” Zone! After a few phone calls over yummy beer at the Port Townsend Brewery we hopped on a sailboat called “The SUVA”http://schoonersuva.com/ the next morning with 5 other folks…the SUVA is a 64 foot sailboat complete with Captain Lloyd Baldwin, first mate Michael, Cook/Galleys first Lady Alisha and room enough for 7 people to eat, sleep and play sailors! The other couple that came besides us were Al (retired military that flew B52 Bombers) and Kim (retired school teacher)from Spokane WA, both very sweet and liked to have fun! And so we embark on a 5 day tour….filled with mostly great weather (we did have a bit of a challenging first day!), wind for sailing (we buried the rails a few times), starry/moon filled nights (Greg and I chose to sleep outside up top on deck!), fun little harbors, other cool sailboats (including the hippie types with the skull and crossbone flags!), lots of great stories , awesome food (thanks Alisha! We all wanted to take her home with us!) lovely company, a fun captain (cut the sheets!!!) and some good sailing instruction (we all got to be at the “helm”!)…We have to sum it up to a 5 day laugh fest (great for the soul!!) & just being on the water in a sailboat is next to heaven!

If you want a good, old fashioned , unpretentious sailing on a super sweet all teak wood boat Chinese built in 1925, then you want to sail on Schooner Suva, and Cpt. Loyd will treat you right.

After our sail fest First mate Michael put us up for a few days to get our feet back on the ground. Thank YOU Michael for your kindness & opening your home to us! We like sailing. That could be a next life., and the temptation of being eddied out in Port Townsend on a long term basis was hard to resist. But, backcountry rule #101 prevails.----stick to plan A until it completely and utterly fails, and then, and only then, go to plan B. And plan A has always been to ride from Vancouver to San Diego. We have Kids & Grand Kids there!

A nice Ride through rural farm land and dense forest. The roads had good shoulders except for the part where I decided to go for a more rural route where we rode for ten miles or so with no shoulder. All in all though the traffic was light and the roads friendly. More Good riding with nice weather! Getting off the ferry [our 12th] in Seattle was like being at the starting line of the Tour De France with over 100 commuting cyclists rushing to get out in front of traffic. Intimidating. Riding through Seattle is nice, aside from the hills. Bike lanes and paths are well laid out, and like everywhere we have been so far drivers are very patient and polite.

Before crossing the bridge to Bainbridge we sat to eat blackberries and lunch when rolling along came a tandem couple that are riding the Pan American Highway from the very most northern part of Alaska to the southern tip of Argentina. They have finished the northern section and were just beginning to head south out of Seattle via the West side of the Olympic Penninsula. We hope to meet with them when we get to the coast. if you want to check out their seen go to http://2totango.net./2totango.net

We are now being treated with Seattle hospitality by Kara and Jeff Stone who are sharing their home and showing us their hood. Thanks.
Posted by t and g Vroom at 1:21 PM